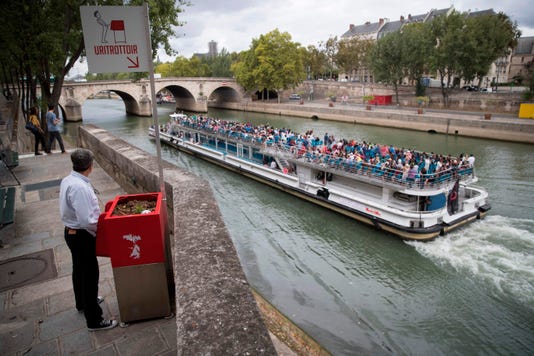 A man stands at a “uritrottoir” public urinal on August 13 on the Saint-Louis island in Paris, as a “bateau mouche” tourist barge cruises past.(Photo: Thomas Samson, AFP/Getty Images)

Tourists visiting Paris’ Notre-Dame Cathedral and River Seine might see more than they came for as public, exposed urinals are now available for use across the city.

The bright red “uritrottoirs” are meant as an eco-friendly solution to public peeing. The receptacles look like a planter at first glance, with greenery filling the top. But, a sign directs eyes down to the side of the structure, revealing a urinal. Aside from a slight U-shaped catcher, there are no privacy shields for any man using it.

And not all of the urinals are tucked away in private places – one actually faces a waterway frequented by tourist boats.

The uritrottoir on the Ile Saint-Louis, near the Notre Dame cathedral and about 22 yards away from a school has been widely criticized by locals, Reuters reports.

“There’s no need to put something so immodest and ugly in such an historic spot,” local art store owner Paola Pellizzari told Reuters.

Paris has struggled to prevent public or “wild peeing” for years, even implementing a “incivility brigade” to enforce fines for uncouth behavior in 2016.

The company behind uritrottoir says the receptacles are filled with straw, where the urine flows, and can be used for compost within a year. The uritrottoir, marketed as odor-free, also comes in a variety of shapes and sizes.

More: Passenger: Airline made me sit on urine-soaked seat