Tessa Otto, a senior at UW-Oshkosh, talks about traveling the nation on a motorcycle given to her by Harley-Davidson as part of her internship.
Mark Hoffman, Milwaukee Journal Sentinel 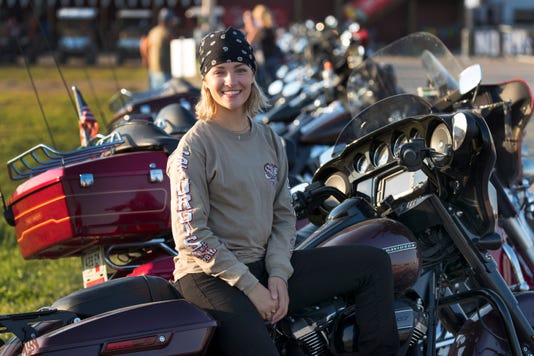 Harley-Davidson intern Tess Otto sits on her company-issued motorcycle at the Pappy Hoel Campground & Resort in Vale, S.D. She gets to keep the motorcycle after her internship.(Photo: Mark Hoffman/Milwaukee Journal Sentinel)

STURGIS, S.D. – Tessa Otto has put about 8,000 miles on her Harley-Davidson Street Glide this summer, and she’s being paid to do it.

The University of Wisconsin-Oshkosh senior is one of eight college students getting paid to ride motorcycles and document their experiences as Harley-Davidson summer interns.

This week, Otto rolled into the Sturgis Motorcycle Rally on her twisted-cherry-colored bike, named Fiona. It’s practically brand new, a perk from the internship, and she gets to keep it when the summer’s over.

He and Tessa made the trip from Wisconsin together.

“Tessa’s bike definitely has a little more oomph to it. If she hammered on the throttle, I probably couldn’t keep up with her,” Greg said.

As one of the traveling Harley interns, Otto has been to biker events in Portland, Ore., Seattle, Los Angeles and now Sturgis.

Sometimes she rides 500 miles in a day, six days in a row.

That could be tiresome, no matter how much you love spending time in the saddle.

But the scenery’s different every day, and there’s always the destination to look forward to and the people you will meet at the biker event.

“I am trying to pack in as many miles as I can and meet as many people as I can,” Otto said.

“The response has been overwhelmingly embracive. … People are excited about what I am doing,” she added.

This summer, she’s done social media work at The Wild One flat-track motorcycle race in Castle Rock, Wash., and she was at the Born Free bike show near Los Angeles.

“I haven’t drove my car since June,” she said.

A self-described outdoorswoman who twice won snowshoe championships, Otto was raised on a farm in Kennan, a town of 130 people in northern Wisconsin.

She grew up riding, as a passenger, on her dad’s Electra Glide.

There are a lot of good family memories from that bike, Greg Otto said.

“I got a motorcycle, a wife and a baby all about the same time. … As my kids were growing up, we started out with just little trips around the yard, and then to my parents place a mile down the road. Then the rides got farther and longer,” he said.

“I am very proud of her,” he said about Tessa’s internship with Harley, which was no small feat given that more than 7,500 students from about 30 countries applied for the eight positions.

The internship program is part of Harley-Davidson’s efforts to attract younger motorcyclists. The company has other internships, too, in areas such as engineering and human resources.

Otto’s goals are to finish school this year with a bachelor’s degree in project management, and, hopefully, land a job with Harley.

“This is a brand that’s been with me my entire life,” she says.

Who we are. Where we go. What we need to know.

Each week in this newsletter, Sarah Hauer will serve as your city guide and share stories about Milwaukee, its people and what’s happening around town.