Jefferson Graham visits a Chase bank to see how to use a mobile phone to withdraw cash, without having to use a physical debit card, on Talking Tech.
USA TODAY 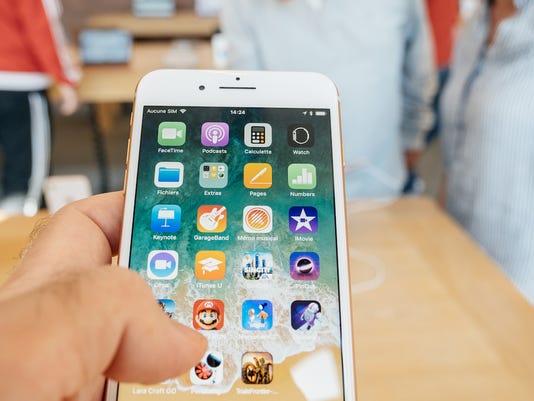 Now that Apple has crossed the $1 trillion mark, Loup Ventures analyst Gene Munster looks ahead to what is in store for the company and its investors.(Photo: Hadrian / Shutterstock.com)

Apple Pay and compatible smartphone-payment systems are finally conquering CVS and 7-Eleven, but the rest of retail remains a tougher sell. So do customer habits.

The news revealed during Apple’s third-quarter earnings announcement will end one of tech’s sillier holdouts. The drugstore and convenience chains, along with a few other big retailers, had backed a doomed mobile-payment scheme, CurrentC, that required scanning barcodes on phone screens.

Apple Pay, Google Pay and similar apps on the Apple Watch and competing smartwatches use NFC, short for “near field communication.” (Samsung Pay also employs NFC but adds a separate system to emulate a credit card’s magnetic stripe.) This wireless technology works at least as fast as swiping a card and does so far more securely.

But most phone users ignore it, even after all the buzz over Apple Pay since its 2014 launch.

“29 percent of iPhone users reported using Apple Pay ‘recently’ (i.e. within 3 months) at the point of sale,” e-mailed James Wester, research director for global payments at the market-intelligence firm IDC. “But 19 percent reported their last use of NFC was more than 3 months ago and 52 percent said they have never used it.”

IDC research showed even worse adoption for Google Pay, the latest name for the phone-payment system Google debuted in 2011.

“15 percent reported using tap-to-pay with their phones recently (again, within 3 months), while 13 percent said their last use of NFC was more than 3 months ago and 72 percent didn’t use Android Pay for tap-to-pay,” Wester wrote.

More: You’ll soon be able to use your iPhone to pay for CVS prescriptions with Apple Pay

More: How much is $1 trillion? Well, Apple could buy everyone in San Francisco an apartment.

But if you can pay with your phone, you should. NFC payments–even if a place only mentions Apple Pay, any NFC app should work–protect your credit-card account by “tokenizing” it into a virtual card for each transaction.

“I am unaware of any tokenized transaction that has been compromised,” said Jason Blackhurst, a senior vice president for innovation and strategic partnerships at Visa. The only cases of NFC fraud he recalled had thieves using stolen account information to add somebody else’s cards to their phones.

Blackhurst noted that this tokenization and encryption adds small overhead costs that phone-payment users don’t pay. “We think it’s worth it, and we’re just eating that cost,” he said.

If you go to Argentina, Korea, Mexico, or Portugal, for instance, your phone-based money is no good there whether you use Apple or Google Pay.

The biggest boost to smartphone payments is coming down the track–literally. Transit systems have slowly begun to support them, freeing occasional riders from having to buy yet another proprietary transit smart card or install yet another app to avoid higher cash-only fares.

“Those are great use cases for demonstrating the convenience of tapping a phone to pay,” Wester said.

Chicago and London are the two most obvious adopters of NFC, and New York is now planning to join them. The age of many transit fare systems will probably drive more such adoption, Blackhurst said–although Washington’s Metro is adopting an app-based system, and Salt Lake City actually dropped support for NFC payments in April.

For there and everywhere else, there’s still that MasterCard, Visa, American Express, or Discover card in your wallet.

Rob Pegoraro is a tech writer based out of Washington, D.C. To submit a tech question, e-mail Rob at rob@robpegoraro.com. Follow him on Twitter at @robpegoraro.