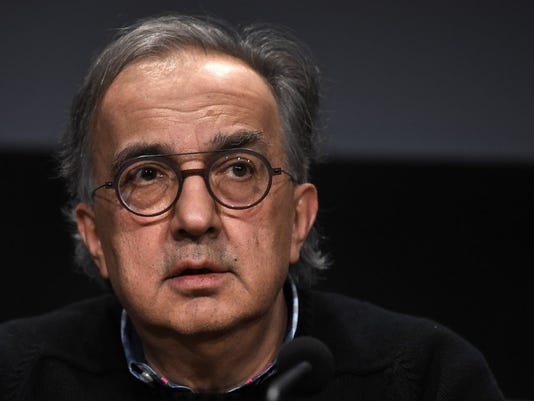 CEO of FIAT and Chairman of Ferrari, Sergio Marchionne, gives a speech during the presentation of the new Alfa Romeo Sauber Formula One Team car on Dec. 2.(Photo: MARCO BERTORELLO, AFP/Getty Images)

The sudden end of Sergio Marchionne’s reign as CEO of Fiat Chrysler Automobiles casts a spotlight on his revolutionary tenure.

When no one else wanted Chrysler in 2009, he saw opportunity. Marchionne, 66, was replaced Saturday amid a grave health crisis following recent shoulder surgery.

As chief of Fiat, he rescued Chrysler from the brink of liquidation – with help from the federal government and the United Auto Workers union. Then, he proceeded to roll out a turnaround plan that transformed the automaker into a global force.

That improbable feat places Marchionne among the auto industry’s legends.

“In almost 10 years the business has been completely turned around,” said Dave Sullivan, manager of product analysis at AutoPacific. “It’s a very different picture from back then, and there’s really one guy who was at the top making those key decisions.”

Here’s how he did it.

1. Found a diamond in the rough

Everyone else’s trash was Marchionne’s treasure.

When Chrysler collapsed during the Great Recession and the auto industry’s financial crisis, the Bush and Obama administrations provided billions in emergency loans that preserved the company and funded its Chapter 11 bankruptcy.

More Money: Tesla to suppliers: We want our money back

The Obama administration seriously considered liquidating the company. Instead, Marchionne proffered a deal in which Fiat would acquire partial ownership and operating control of Chrysler in exchange for product help and distribution capability.

Several years later, Fiat acquired full ownership of the company after years of product successes and operational improvements. And the company became FCA, having paid off its government loans and become debt-free.

In retrospect, it seems like an obvious path. At the time, however, many believed Chrysler was doomed to fail.

More: Marchionne out, but Fiat Chrysler is well positioned for what comes next

“He essentially picked up the Chrysler business for almost nothing,” Sullivan said.

It’s also easy to forget that the future of Fiat itself was in question when Marchionne got Chrysler. He knew this.

“If we stand still and do nothing, we are doomed. I can’t close it, it’s a car company. I’ve tried to sell it, believe me, but there are no buyers,” he said at the time, according to Sanford Bernstein analyst Max Warburton’s note Monday. “The only way out is to build it.”

The Jeep brand has retained indelible appeal throughout Chrysler’s ups and downs.

It is the quintessential American brand. In fact, it recently ranked No. 1 on consultancy Brand Keys’ 16th annual list of the 50 Most Patriotic Brands in America.

Marchionne grasped the brand’s lasting appeal and authorized extensive product overhauls, such as the redesigned Grand Cherokee, Cherokee and Wrangler.

“In a world full of vanilla crossovers, the Jeep brand is really the anti-crossover,” Sullivan said.

Jeep has benefited tremendously as consumer preferences have shifted toward SUVs amid sustained low gasoline prices.

Aggressive growth in China could catapult Jeep into a new stratosphere.

Mike Manley, who succeeded Marchionne as CEO after serving as head of Jeep and Ram, said in June the company’s goals is for 1 in 12 utility vehicles worldwide to be Jeeps by 2022. In 2009, it was 1 in 23.

Marchionne’s leadership was rooted in his exceptional work ethic.

He was “one of the greatest … commander-in-chiefs” in the history of the industry, Evercore ISI analyst George Galliers wrote Monday.

Known among colleagues, the media and analysts for effectively living on a plane, Marchionne was a globetrotter. He deftly steered the company’s presence in Europe, the U.S. and China, despite much different challenges in each region.

And he did it by working extremely long hours and demanding the same of his executives.

“He must have been hell to work for,” Bernstein analyst Warburton wrote. “The workload was fearsome and he said he expected all of his team to be ‘available at all times except when on a flight.’ “

To be sure, “the consequences for many in health terms – and family life – have been substantial. But some of those close to him tell the story of a man who listens – and never lost that skill late in his career.”

While it may have taken a tremendous physical toll on him, his work ethic helped preserve the jobs of 236,000 employees, Bernstein noted.

Marchionne was a maverick, as exemplified by his failed bid to pursue industry consolidation in recent years, during which he proposed an unlikely tie-up with General Motors.

When global automakers were obsessing over the need to have fuel-sipping cars and sedans, he realized that Fiat Chrysler’s new entrants, the Dodge Dart and Chrysler 200, weren’t working.

Rather than doubling down, he got out entirely. He killed both vehicles, effectively pulling Fiat Chrysler out of the small-car business.

It was a prescient move. Today, small-car sales are dismal. And earlier this year, Ford made essentially the same decision, deciding to kill the Focus, Fusion and Fiesta passenger cars. Toyota killed the Scion brand. And General Motors is said to be weighing killing the Sonic small car.

In addition, Marchionne refused to invest heavily in self-driving cars while the rest of the industry was piling money into the technology. Instead, he struck a partnership with former Google driverless car project Waymo, which many observers now believe is leading the pack.

In an industry in which information about the future is often hard to come by, Marchionne set out a clear vision. He had a policy of revealing five-year plans for the company’s growth, including his latest June 1.

The plan allowed investors, car buyers and the media to hold the company accountable while also ensuring they knew where the company was headed.

Marchionne also was known for his candid, colorful, intellectual and occasionally fiery responses to questions from journalists and analysts.

“Those of us watching have received an education in management, finance, politics, oratory and what’s possible via sheer force of will,” Warburton wrote.