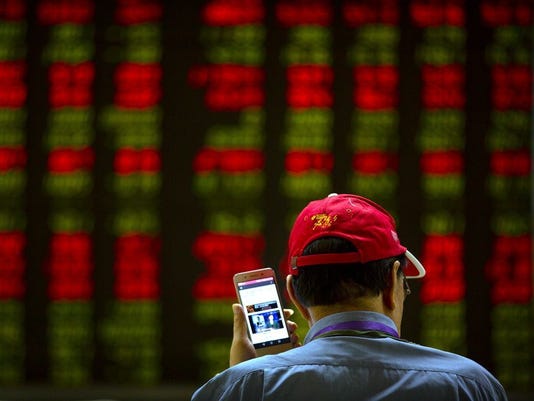 A Chinese investor listens to a news report on his smartphone as he monitors stock prices at a brokerage house in Beijing, on July 6, 2018.(Photo: AP)

The Chinese government said Friday that it “immediately” retaliated against increased U.S. tariffs on Chinese imports as President Donald Trump’s administration effectively launched a trade war with one of its biggest trading partners.

China’s foreign ministry in Beijing said that tit-for-tat duties on U.S. goods took effect straight away after Washington’s 25% tariff on $34 billion worth of Chinese goods kicked in at 12:01 a.m. ET on Friday. The ministry gave no further details.

Beijing had previously flagged that China would make a “necessary counterattack” if needed on a similar amount of U.S. exports including soybeans.

The United States had a record $375 billion trade deficit with China in 2017, according to Bloomberg data. Beijing is Washington’s largest, single-country trading partner followed by Canada and Mexico. The 28-nation European Union political bloc is the U.S.’s biggest trading partner, representing more than $1.1 trillion in goods and services in 2016, according to the Office of the United States Trade Representative.

Still, financial markets in Asia fell sharply on the development before erasing some of those early losses as investors responded with calm. Shares on China’s main Shanghai index jumped 0.5% while Hong Kong’s Hang Seng index added 0.9% as the uncertainty ended over whether Washington would escalate tensions with Beijing.

U.S. stock futures on Wall Street traded flat ahead of the market’s open in New York.

“The market is acting very calmly,” Francis Lun, chief executive of GEO Securities Ltd. in Hong Kong, told the Associated Press. “But of course, the talk of a trade war already depressed the market for about 1,000 points in the past month already.”

President Trump says the era of “global freeloading” is over. He told rallygoers in Fargo, North Dakota, that his tariff standoff with China, the European Union and Canada is aimed at fixing his predecessors’ “disastrous trade deals.” (June 28)
AP