No U.S. team to root for this summer? Don’t worry, we’ve got you covered on how to become a bandwagon fan of this country.
USA TODAY Sports 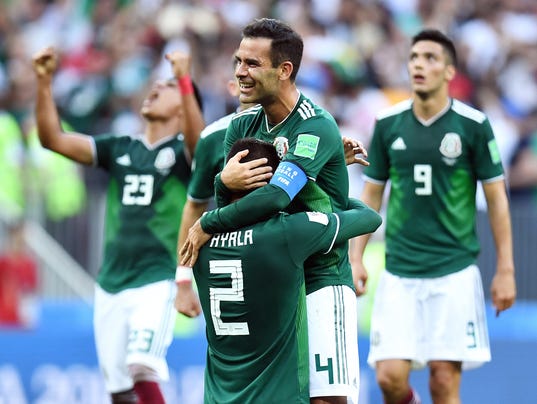 MOSCOW — Remember when it seemed like the United States was getting the upper hand in its local soccer rivalry with Mexico?

It wasn’t so long ago. As recently as 2016 you could have supported such a claim, but it is a laughably distant dream now.

Mexico has sometimes been a World Cup underachiever, often had more talent than tenacity, and regularly saw its nerve fail when the opportunity for greatness presented.

As of Sunday night it has a very different status. After beating Germany 1-0 in a stunning upset at Luzhniki Stadium in Moscow, Mexico now finds itself, incredibly, as a genuine contender to win soccer’s greatest title.

It’s not a joke. The gravity of this win is not to be underestimated. Germany is the most prolific fast-starter in World Cup history. The last four World Cups, it not only triumphed in its opener, but scored 20 goals in the process. It is immune to upsets. It is the reigning world champion and followed up by winning the Confederations Cup with a reserve team. Things like this happen, but not to Germany.

Mexico had the right blend of ability, courage and belief to move right to the top of one of the World Cup’s hardest groups and already put a foot in the knockout round.

With Sweden and South Korea to come, it should happen, especially with this kind of momentum. And then, of course, the really hard bit.

Mexico has qualified for the round of 16 six straight times, but crashed out at that juncture each time.

There has often been hope, but rarely with as much to back it up as this. From goal scorer Hirving Lozano’s lightning feet, Guillermo Ochoa’s goalkeeping heroics, Andres Guardado’s craft and the fearless efforts of many more, Mexico has a team it can believe in.

Lozano is a true gem and his 35th minute strike proved to be the difference. For much of the remainder – and all of the last half-hour, it was a rearguard effort, but one where Mexico never cracked and needed only a smattering of luck.

Cue celebrations across Mexico but also among the tens of thousands of El Tri loyalists who have ventured here to Russia.

They are an army of color, loud and proud and wildly popular with fans of other nations. They dress up as peacocks and warriors and in costumes poking fun at Donald Trump, they sing and dance and charm their way around Russia.

I wrote a couple of days ago that U.S. fans shouldn’t support them because it’s un-soccer to cheer for your rival, even if you’re not in the tournament. But it just got a bit harder.

Teams that win World Cups are those can neutralize. Mexico cut down soccer’s most clinical attacking force and made it look decidedly ordinary.

It was a heck of a way for a journey to begin. It may be a long one.